The JJSB has a very strong and historical background as it could be seen from the undermentioned paragraphs.

India got the freedom from the clutches of the British Ruler in the year 1947 by the amalgamation of the then princely states. Following this independence, the then various princely States of the Saurashtra Region,amalgamated/merged with the Central Government in 1949. In the process,5 (five) Districts of the Saurashtra merged with each other and cared out (formed) in one state of “C” Grade for the welfare of the people.

Even before formation of this “C” Grade State of Saurashtra, different Co-operative Societies were functioning at different places, out of which some co- operatives doing various co-operative activities. In the year 1951,SaurashtraState-Co-operative Bank was formed and that marked the opening/forming of various District Central Co-operative Banks in different Districts.

During 1960-’61,Gujarat State was separated from Bilingual metros State of Bombay and during this period Saurashtra Co-operative Bank extended its area of operation in the entire district.

On 1st May 1960,the Bombay State split into the States of Maharashtra and Gujarat (part of the former Bombay State).

The Bank has since its inception, fortunate enough to get the dedicated, committed and visionary leaders as its Chairmen. To mention the names of some of the great personalities like Shri Maldevjibhai  Odedara(Promoter and Founder), late Shri Chitaranjandas Raja,late Shri Muljibhai Patel,late Shri Govindbhai Sekhda,late Shri Lilabhai Sidibhai Khunti who immensely contributed for the growth of the Bank during their respective tenure as Chairmen of the Bank.

The nomenclature of the Bank changed to “The Junagadh Jilla Sahakari Bank Ltd” w.e.f.10.11.1997 under the chairmanship of Shri Jethabhai Panara. Bank started its functioning and banking operations, albeit, slowly but firmlyand improved its bottom line year after year up to 1980. Bank had bad patch after 1981 but, due to the timely support from the Government of India and Government of Gujarat Bank could survive and is able to reduce its accumulated losses from a huge amount of Rs.98/- Crore to a reasonable amount of Rs.38/- Crore as on 31.03.2016. As per the Draft Annual Plan submitted to NABARD, the Bank is expected to turn around i.e. start earning profit from 31.03.2019. Incidentally, the Bank is earning operational profit since last 5 years and reducing its accumulated losses each year by approximately Rs.9/- Crore.

As on 31.03.2016, the Bank has a network of 44 branches, spreading in 3 districts of Junagadh, Porbandar and Gir-Somnath. Out of 44 branches,11 branches have their own premises and 20 branches have Safe Deposit Locker facilities. All branches are on CBS platform and NEFT/RTGS enabled.

Due to active support of NABARD, the Bank is starting its own ATM at Manavadar branch by the end of 31.03.2017 and two more ATMs are to be installed very soon at Keshod and Sutrapada branches. Orders for which already placed and both the ATMs would be operative by the end of 31.05.2017. This facility of ATM will provide 24 X 7 hassle free payment facility to our valued customers. The Bank is also installing 10 Micro ATMs very shortly at PACS so that, customers/members will get 24 X 7 various banking facilities at their doorsteps including cash deposit and cash withdrawals without coming to the branch.

The Bank has, as on date,12000 (approx.) accounts those which are linked with their Aadhaar Cards and thus getting the benefits of DBT under various Government Subsidies Schemes whereby amount is directly credited to their respective Savings Bank Accounts with the Bank.

Following table will show the progress of the Bank in the key banking areas, during 2017 to 2021 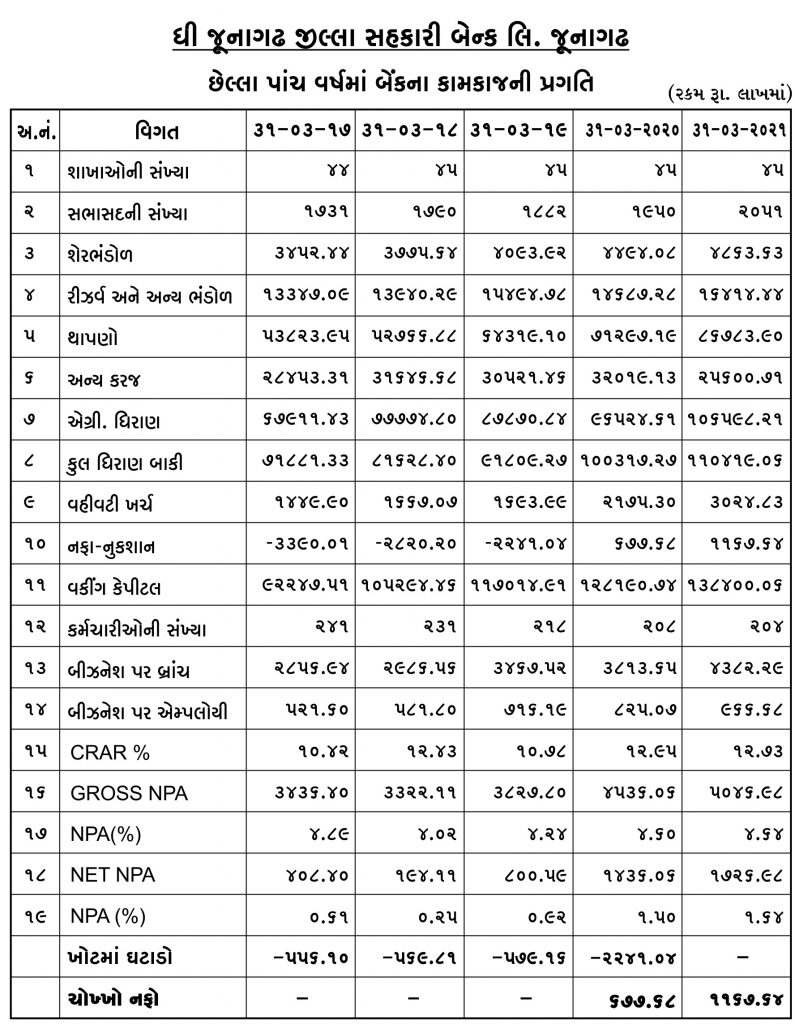